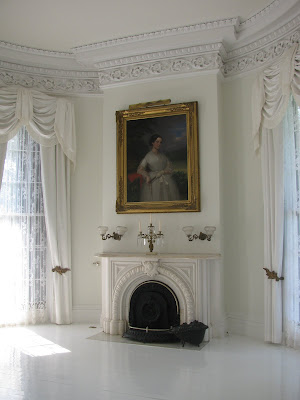 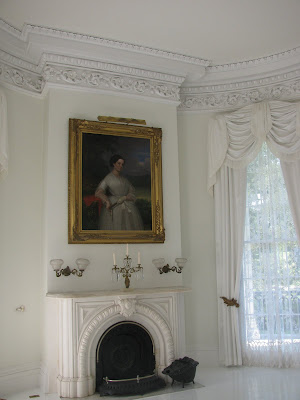 Meredith Tague and I joined the members of SOLA on a writer’s retreat at Nottoway Plantation. The weekend started with a tour of the plantation. We went through several rooms before ending up in The White Ballroom, where they hold a lot of weddings.

Before I continue, I must state that I am a skeptic. While I have had many personal experiences with premonition type dreams, I have yet to meet a ghost.

In this rounded room is a portrait of Mary Henshaw (painted in 1857), who is not a member of the original family. The painting was procured in 1980 by Nottoway’s previous owner, Arlan Dease.

Everyone entered the ballroom on the east side, and after the tour guide gave a bit of history, she instructed us to look at the woman as we walked to the west side of the room. As instructed, I did just that. Not only did the woman’s eyes follow us, it appeared that her entire body shifted so that we could always see her as if we were standing in front of her.

This was cool. The guide talked about the pulley/bell system that they used long ago to call the servants, and I took a picture of the silver knob by the fireplace. Then I took a picture of the painting from where I stood on the right side of the room. The guide finished her talk, and I decided to take another picture of it from the left side to capture the full effect, which I attributed also to the round shape of the room.

A strange message that the storage card had malfunctioned popped up onto the screen. This had never happened before. I thought there was plenty room on it, but maybe I needed to clean it up again. I turned it off and on, hoping this was not the case. I also feel it important to mention that at work that morning, I had taken several pictures of the hot air balloons. The camera had started making a low whirring noise off and on, which it had continued to do upon arrival at the plantation. I thought my beloved equipment had finally bit the dust.

I turned it back on and the storage malfunction message popped up again, so I again shut it down, took out the card and re-inserted it. Wa-la! It began working, so I shifted through the pictures to make sure they were there.

The last picture on my camera was of the silver pulley. The pictures of the lady were gone.

The weirdest feeling coursed through me. To say it was a chill put it mildly. I looked around but discovered I was the only one actually in the room. I could see everyone in the next room (the dining room), and dazed, I stepped into the hall, trying to grasp what just happened.

Thinking how crazy it was that someone asked this right after my strange experience, I simply had to relay what just happened. Then I slipped back into the room to retake the pictures. Before I did, I made sure to ask the lady in the painting for permission, and guess what? I still have those pictures!
Posted by Josephine Templeton at 7:47 PM