Hard to believe a week ago was my writing group's luncheon. All that planning ... all that hard work ... and I am pleased to announce that it was quite a success! Sure, we had a few glitches, but what function doesn't? For the most part, everyone had a great time, and hey, we learn from our mistakes, right? So next year ... when Sabrina Jeffries is our speaker ... watch out! :)

Friday night, we had a wonderful dinner with Sherrilyn Kenyon and Dianna Love at Drusilla's Seafood Restaurant. I admit I was super nervous, but Sherrilyn was just like I remembered from the Birmingham luncheon - sweet and down to earth! 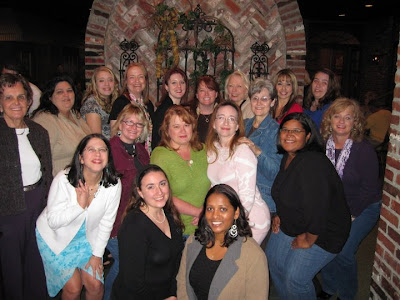 Saturday, I operated on four and a half hours of sleep. I had stayed up until 1:30 am working on attendee badges, envelopes, etc. Next year, Beth Bares ... I WILL take you up on your offer to help!

Strangely enough, I actually woke up at 5:30 am and could not go back to sleep. As I had gone to bed without having finished my "assignment" (my body pretty much forced me), I did what I could until it was time to get dressed and head to Crowne Plaza in Baton Rouge. Show time!

While we were unloading stuff from our vehicles and setting up, we saw Nick Saban leave out with his bodyguards. Saban used to be LSU's head coach but now heads up Alabama's team. They were playing one another that day - one of the biggest games of the season. I sent my hubby a text saying I wished I could've gotten a picture of him but oh well. So ... went on about the business of helping set up.

A little while later, Beth Bares and Laura Burks were determined to snag a picture with him, so I followed them with my camera. The spunky minxes raced up to him and politely asked to take a few pictures, to which he agreed. So ... all three of us snapped pictures of a smiling Nick Saban ... Of course, THAT was before the game ... I don't suppose he smiled too much later that night ... 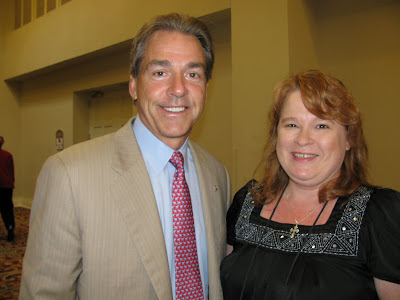 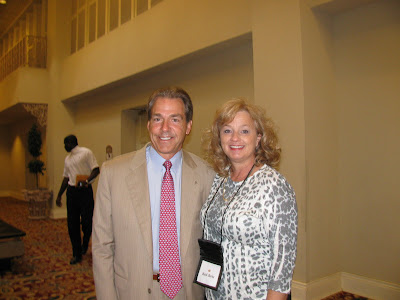 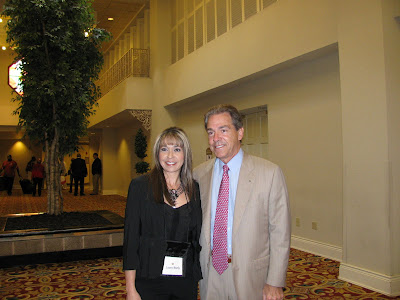 Leo Honeycutt is a wondrously funny and entertaining Emcee. He regaled us with the story of how he ended up writing the book on Governor Edwards, and his help in passing out raffle and door prizes was quite humorous. Well done, Leo! Thank you!

Sherrilyn's speech was quite moving and encouraging. Her determination to keep writing is very inspiring. She's gone through the trenches every writer must go through, and she is one of my heroes (my hubby being my first). While she's hit the New York Times numerous times, she is still just this down to earth woman with many tales of life as a mother and wife. Thank you, Sherrilyn, for taking the time to visit us in Louisiana!

On to the book signing ...
I sat beside Dianna Rowland, whom I interviewed via email for Town Favorites. Very nice lady who will be at our next HeartLa meeting on November 20th. Our book signing table had a constant stream of fans ... mostly for Dianna Rowland ... but ... well ... hey ... I did sell two books! :)

So all in all, Heart of Louisiana's 4th Annual Romance Readers' Luncheon was a smashing success! 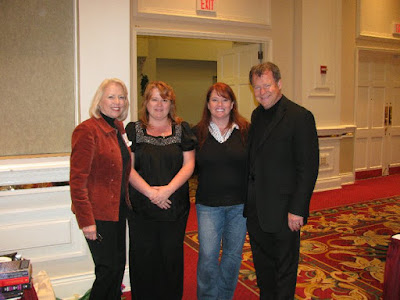